10 Reasons Why Escape Rooms Are The Ultimate Team Building Activity Searching for the best team building activity in Hyderabad for your employees?

Wondering whether escape rooms live up to their hype as the ultimate team building activity?

Let me give you the short answer: escape rooms give your employees an opportunity to sharpen crucial office and team skills, build connections and grow respect among each other.

In short, they ARE the ultimate team building activity.

Now, let’s go through that in a little more detail. If this is the first you’re hearing of escape rooms, or if you don’t have a clear idea of what goes on in an escape room, here’s escape room 101 for you.

First of all, escape rooms are designed to be group, or team, experiences. You and your team will be locked inside a themed space* simulating a certain situation, for 60 to 80 minutes (the exact time depends on the game).

Your ‘mission’ will be to achieve a certain objective inside, and free yourself from the room before your time runs out.

To do that, you’ll have to spot clues, solve puzzles, and accomplish tasks to work out the way forward.

*the space may be a single room or multiple rooms.

At the workplace, your employees are exposed to a high intensity, high stakes environment.

High intensity as in there are deadlines to meet, expectations to meet, and exasperating little problems to beat.

High stakes as in your bottomline, your reputation among clients and the prospects of getting future contracts depends. In short, it’s office work after all.

An escape room, on the other hand, is a place where friends and colleagues can hang out. While the intensity of deadlines and problems (puzzles and tasks) is still there, the stakes are much lower as it’s just a game.

This gives your employees space to put their anxieties aside, and enjoy taking part in the proceedings.

I like to call this – leaving in the zing, but taking out the sting. And that’s a major reason why escape rooms are the ultimate team building activity.

They put real-life workplace skills to the test

Some of the puzzles and tasks inside an escape room may require simultaneous input from different places in a room. In other words, two or more people would have to synchronize and collaborate to make it work.

Clues and tasks may be planned so as to require collaboration between people who can’t see each other.

To spot clues quicker, team members would have to spread out across the room. Once someone spots a clue, they need to tell the others what they’ve found.

As you can grasp, all of this needs team members to be able to clearly communicate among themselves.

What’s the quickest way of cracking a puzzle? What’s the best way of keeping certain props that may come in use later on, accessible?

All these aspects of escape rooms sharpen your team members’ problem solving skills.

With their clock counting down, the team will always have to think about how to get more done in less time.

Is there a way to arrange certain props that would make a task easier to do?

If a puzzle refuses to be solved, would it make more sense to return to it later?

In other words, the team is figuring out how to be more productive.

OK, so escape rooms improve some workplace skills, but if the players aren’t motivated to take part, then it’ll all be for nothing.

So one of our easier escape rooms is The Poltergeist Room. In it, players have to investigate alleged paranormal activity in a haunted house, and perform an exorcism, if need be.

One of our tougher escape games is The President’s Secret Book. It pits players against the US President’s office and the Presidential Guard as they try to steal a top-secret book.

Just a couple of scenarios; we have many more for you to choose from. The question is – how many of your employees would want to NOT take part in the game?

And it’s not just about the scenario. Remember, players are led into an actual themed room.

It’s about as real-life as it gets – the ultimate dream adventure!

And that’s what draws and incites every participant to take part in the game voluntarily and wholeheartedly. An essential feature of a good team building exercise.

They can be in-person or online

The best way to have a hands-on team experience is to travel to our Banjara Hills location and play in-person. That would also maximize features like players actually being in the room and experiencing the entire game first hand.

However, we know that today’s workforce is becoming more and more remote. Companies and businesses are going global, and hiring employees across city, state, and even national borders.

And with work from home becoming more of a thing, it might be difficult to schedule an in-person experience that works for everyone.

This is where online escape room games come in. 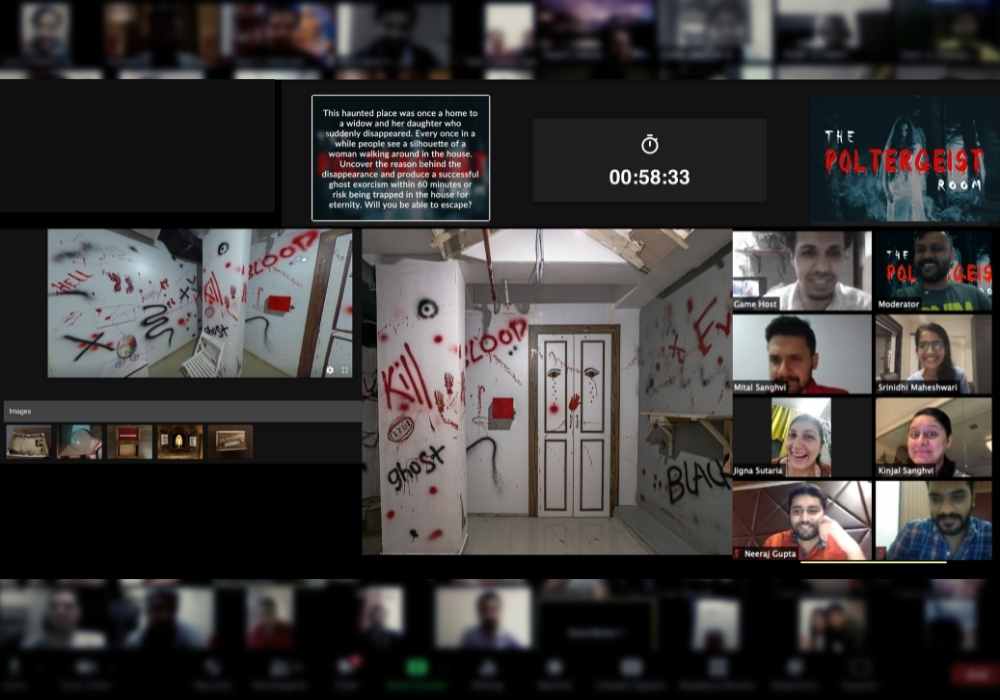 Here at Lock N Escape, you can opt for a livestreamed escape game, where an actor with a camera will follow your directions inside an in-person escape room.

Or you can go for one of our virtual escape rooms where the entire game takes place in VR.

You can choose from different kinds of game themes

Many people hear the concept of being locked inside a room and assume that escape games are horror or mystery themed.

Escape games can have many different themes, from sci-fi to magic to magical (as in featuring witches and potions).

Any escape room worth its salt would offer you at least two to three different themes in its rooms.

We at Lock N Escape want to reach out to a broader audience, and so we have chosen diverse game themes, ranging from natural disaster (escaping a coming hurricane) to Marvel/DC-type superhero, and even Egyptian mythology.

(now you also know that we’re a quirky and offbeat Hyderabad attraction, but we’re deviating from the point)

So you really have a lot of choice to select a team building event based on a theme that your team will really relish.

They build trust and respect among team members

Why are trust falls included in so many ‘team building’ seminars and events? It’s because they’re supposed to build trust among team members. And that’s a crucial part of team building.

Here’s the deal: do you really think sustained and credible trust is built by someone trying to catch someone else from falling?

And if it does, does that mean that if the other person for some reason can’t catch their partner in time, there’s no trust between them?

The escape room approach to trust building is a lot more elegant.

The very nature of the game – thrilling, high intensity, with a clock ticking down – gives every team member an incentive to put their best foot forward in the game…

And conversely gives the team as a whole a reason to trust every individual member to do their best.

And once you see your teammates in action, doing their best to propel the team forward, you’ll start gaining respect for their dedication, their abilities, and their team spirit.

Studies show that 66% of employees want to quit if they feel unappreciated.

Escape room team building events are an opportunity for every team member to realize the value they bring to the team, and feel appreciated for their contributions.

Teams learn how to accept defeat

Despite your best efforts, you may not be able to impress the client enough to bag their next contract. Or for your proposal to be approved.

That’s a part of worklife. As a team, you have to find a way to accept the defeat, but not feel defeated and move onwards.

As you’ve probably guessed, escape room events are a great way to teach teams how to do that, simply by not being as high stakes as the office work.

You couldn’t make it out of the room in time? Does that mean you’re going to start turning on each other? Or that you’ll laugh it off and head to the Inspire Cafe for coffee and croissants?

That’s the spirit you need to imbibe and carry over to the workplace.

Teams can socialize and make memories

No, people don’t really socialize at the water cooler chat. Nor during lunch break, no matter how brightly coloured the cafeteria is.

A workplace is a workplace and offers limited opportunities for socializing.

An escape room, on the other hand, can be a great place for your employees and team members to socialize with each other and make awesome memories.

Especially when you’ve got a cafe to gather at after finishing your escape game. 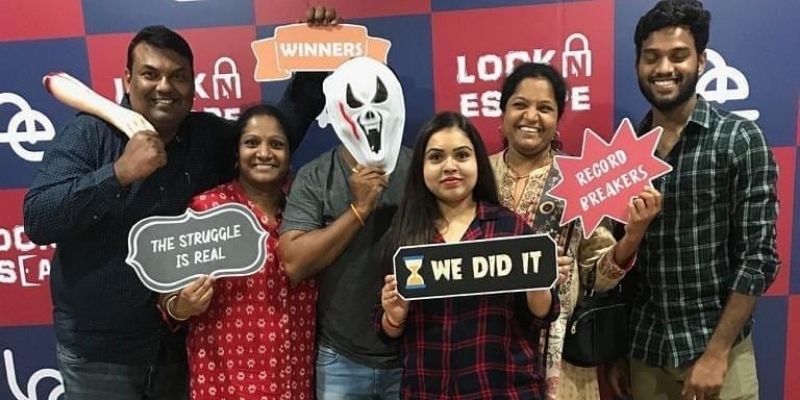 From offering players space to cut out workplace anxiety to giving them incentives to boost office/team skills and mutual trust and respect, to being an awesome opportunity to socialize, your team building event will be successful if you do it in an escape room.

And there’s no time like right now, so why don’t you go ahead and book an event for your team in Hyderabad / remote team online?